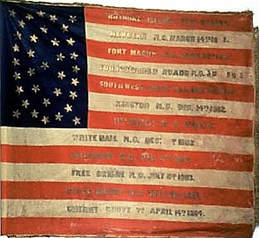 In September of 1861, in response to the War Department's call, the New Jersey moved quickly to recruit, and provide basic training, for the 9th New Jersey Volunteer regiment. Blessed with both watermen and woodsmen thoroughly experienced with firearms, the State applied to the War Department for authorization to recruit a rifle regiment, a regiment of sharp shooters.  The patriotic response was enthusiastic, and the recruits reported to Camp Olden, named after the New Jersey Governor, just outside of Trenton.

Faced with financial and logistical constraints, the regiment was initially issued with obsolete, Belgian muskets, hardly consistent with its mission, but by December, the muskets were withdrawn and replaced with Model 1861 Springfield rifle muskets.  The troops were issued the standard blue uniforms, but with perhaps a nod to the green attired Berdan's Sharpshooters, seam piping and NCO chevrons were green, not sky blue.  On December 5th, the regiment embarked by train for Washington, DC.

Initially encamped in an open field along the Bladensburg Turnpike too the northeast in Maryland, the regiment was soon moved to a healthier location in Northwest Washington known as Camp Cameron, located at Meridian Hill, roughly 1.5 miles due north of the White House.  Here the regiment continued to train and drill, and may even participated in a target shooting contest with members of Berdan's regiment of sharp shooters.

And soon, the 9th New Jersey was noticed... 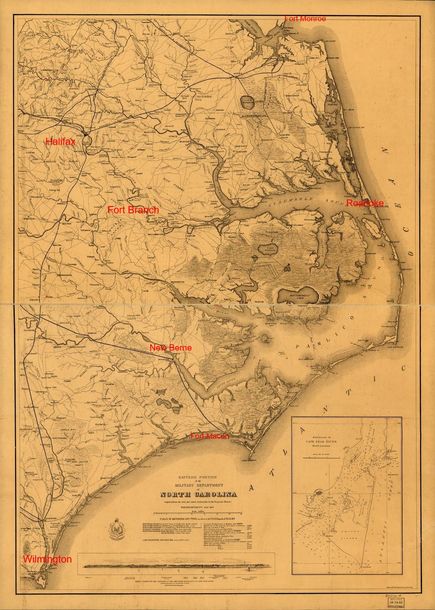 In the Fall of 1861, the Federal High Command under General George McClellan began to develop a strategy to deprive Richmond of materiel support from the ports and railroads of eastern North Carolina.  As the plans evolved, the area of operations was to span the Pamlico and Albemarle Sounds and the key ports of New Bern, Beaufort, and potentially Wilmington.  Included was the intended disruption of the critical Wilmington-Weldon railroad, a direct line of communication to the Confederate capital.

To carry out this campaign, General McClellan selected his friend and associate, General Ambrose Burnside. To be part of the 15,000 man force, General Burnside selected the 9th New Jersey Volunteer regiment he had personally reviewed at Camp Cameron in Washington, DC.

On January 4th, 1862, the 9th New Jersey was transported to Annapolis, Maryland.  Now brigaded with three regiments from Massachusetts, New York, and Pennsylvania under the command of Brigadier General Jess Reno, the troops boarded transports.  On January 9th, amid bitter cold, finally moved down to Fort Monroe, Virginia, joining elements of the US Navy, which had just landed an advance force at Hatteras Inlet, overwhelming the small garrison of defenders.

The way was now theoretically open for the first objective:  Roanoke Island.  The Confederacy was not well prepared.  The weather had other ideas... 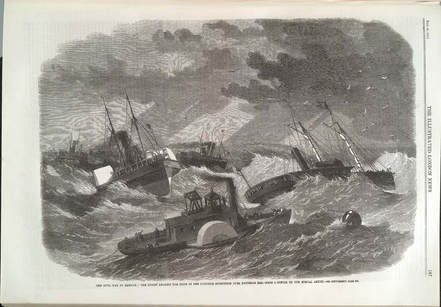 The fleet arrived off of Hatteras Inlet on January 12 in the teeth of a full blown winter gale.  Navigating the Inlet itself posed additional challenges.  The water over the bar ranged from a mere three feet to barely ten, shallow for many of the transport and naval vessels.
It was here that the Regiment experienced its first casualties.  During a brief break in the weather, several of the 9th's officers in a small boat were able to land through the surf and report to Generals Burnside and Reno, requesting a tow through the Inlet.  Unfortunately, the weather closed back in, and on the return trip, the rowboat capsized, resulting in the deaths of Colonel Joseph Allen and Chief Surgeon Gideon Welles.  The others, including Lt. Colonel Charles Heckman, who would come to assume command of the Regiment, survived.

It took almost three weeks for most of the vessels in the fleet to make it to the safety of Pamlico Sound. The Confederate forces under Henry A. Wise did what they could to prepare for the defense of Roanoke Island.

(Figure 4) Plan of the Battle of Roanoke Island
Roanoke Island
Strategically located in Croatan Sound and dominating he approaches to Albemarle Sound and the northern reaches of Pamlico Sound, Roanoke Island was defended by a mere two thousand men, and the valiant, but massively out gunned eight, scratch vessels of the 'Mosquito Fleet'.

A Confederate battery, consisting of nine guns, was positioned to oppose the Union landing, but soon came under a massive bombardment from the Union fleet.  Eventually silenced, the way was opened to land almost twelve thousand men and twelve artillery pieces at the Hayman House and Ashby's Harbor through the night of February 7-8.

In the morning, The Union troops, including the 9th New Jersey, advanced on Colonel Henry Shaw's imperfect entrenchments spanning the high ground across the main road leading north on the island. Anchored at the east and west ends by what were hoped to be 'impenetrable' swamps, the Confederate position boasted three, obsolete smooth bore guns, further hampered in part by incorrect ammunition. Nevertheless, these guns opened at 700 yards and quickly discouraged a frontal assault up the road.

Burnside broke his command into three brigades. The right brigade, under General Parke, advanced though the woods against Shaw's entrenched left flank, but the inexperienced troops soon stalled under fire in the tangled undergrowth. The left brigade under General Reno moved into the swamp and woods against Shaw's right flank.  The two leading regiments, the 21rst Massachusetts and the 51rst New York Volunteers, quickly bogged down in the swamp, trees and undergrowth.  The 9th New Jersey followed with the 51rst Pennsylvania behind them.

To the watermen of the 9th New Jersey, the tangled swamp was familiar territory, Lt. Colonel Heckmen formed the regiment into a column of divisions, with two companies at a time advancing abreast to the edge of the woods. There, within a range of about 100 yards, they opened a devastating fire on the Confederate positions, despite artillery fire from the Confederate position.

At a mere 100 yards, the accuracy of the Springfield rifle in the hands of the New Jersey sharpshooters soon caused Shaw's line to break.  The Confederate reserves could not be brought forward.  The Union troops surged forward, but the 9th was suddenly hit in the rear by 'friendly' fire from Hawkin's Zouaves, part of Parke's brigade charging up the center causeway.  The New Jersey troops went to ground, and the residual fire from the Confederate center and left drove the red pantalooned Zouaves into confusion. However, the incident interrupted the 9th's advance, and elements of the 21rst Massachusetts and/or 51rst New York were probably the first to breach the Confederate entrenchments.

In any event, a retreat by Shaw's troops ensued to the north of the island, where the Confederate forces surrendered, ending the Battle for Roanoke Island. 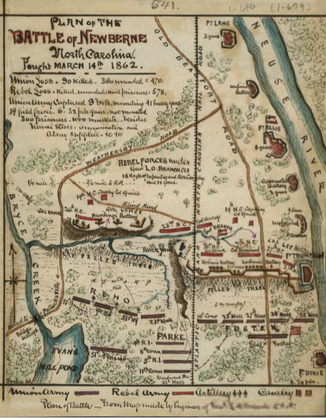 (Figure 5) Plan for the Battle of New Bern
New Bern

Next on Burnside's agenda was the city and port of New Bern on the Neuse River.  With rail connections to the Wilmington-Weldon Railroad, New Bern was a major transshipment point for privateers and blockade runners servicing Richmond and the Confederacy.

On March 3, 1862, the 9th New Jersey again embarked on the transports, and by March 13 they were landed near Slocum's Creek, about fourteen miles from the Confederate works, manned by about 4,500 troops, commanded by General Lawrence Branch.

Again, Burnside commanded about 12,000 Federals, supported by thirteen gunboats.  The army still was organized into three brigades, with the left placed under General Reno, the center under General Parke, and the right under General Foster.  The 9th New Jersey Muskrats were in Reno's brigade.

(Figure 6) The Storming of Fort Thompson
On the morning of March 14th, the 9th New Jersey advanced with Reno's brigade through heavy fog, encountering the Rebel works across Bullen's Branch, swampy terrain considered 'impracticable' by the Confederate defenders, but not to the Muskrats from New Jersey. For four hours, the exposed Muskrats exchanged fire with the entrenched 26th North Carolina regiment, commanded by Col. Zebulon B. Vance.

Finally, in spite of heavy casualties and with ammunition running low, Lt. Col. Heckman obtained permission from General Reno to conduct a frontal assault on the opposing defenses, a tactic taken up by the entire Federal force, and the Confederate resistance crumbled under the overwhelming weight of Union numbers. The city of New Bern was taken. 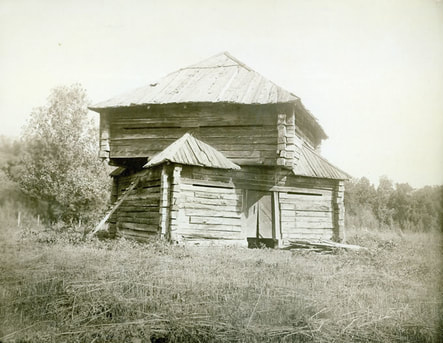 (Figure 7) Example of a Blockhouse
Fort Macon, The Newport Barracks, and the Atlantic and North Carolina Railroad
​
​The next target of the Burnside campaign focused on Fort Macon, which protected the next two deepwater ports: Beaufort and Moorhead City.  Manned by 500 determined Confederates, the Fort was unable to withstand an eleven hour bombardment, and surrendered accordingly.  The 9th New Jersey did not directly participate in the attack, but instead provided support and security along the line of the Atlantic and North Carolina Railroad linking New Bern to Beaufort.  In this role, the Muskrats occupied the abandoned Newport Barracks near the town of Shepardsville, which is now Newport, NC.

​Utilizing newly liberated 'contraband' labor, four blockhouses and accompanying entrenchments and fortifications were built along the railroad, protecting it against raids and incursions by Rebel forces.

​Although the Muskrats were not involved, 'Little' Washington, NC was also captured in this timeframe. The next phase of Burnside's campaign targeted the strategic town of Goldsborough and its critical rail links from Willmington through Weldon to Richmond, Virginia. Before this could take place, the Confederacy received an unexpected reprieve in North Carolina in the form of General George B. McClellan, who ordered General Burnside to bring all possible troops to Virginia in the wake of the failed Peninsular Campaign.  On July 6, 1862, Burnside pulled General Reno and approximately 7,000 troops from North Carolina, effectively ending offensive operations.  The 9th New Jersey was not included in the withdrawal, but did participate in two, aborted incursions under General Foster.  The first attempted to attack Tarboro with a skirmish at Rowell's Mill, but stopped short on the basis of perhaps questionable intelligence.  The second attack  that December was against Goldsborough (via Kinston), but also stopped short after a sharp engagement at Goldsborough Bridge, which resulted in the burning of the railroad bridge and the temporary disruption of that all-important rail line.  Again reacting to spurious  intelligence, and the all-too-real shock of the Federal disaster at Fredericksburg, the Federals again retreated to New Bern.
Bibliography
Secondary Sources:
Longacre, Edward G. The Sharpshooters - A History of the Ninth New Jersey Volunteer Infantry in the Civil War, An Imprint of the University of Nebraska Press. 2017. A comprehensive and highly readable history of the unit.
Zatarga, Michael P. The Battle of Roanoke Island - Burnside and the Fight for North Carolina, Charleston, SC. 2015. A highly readable history written by an esteemed fellow reenactor.
Wikipedia. Burnside's North Carolina Expedition, December, 2017
Wikipedia. 9th New Jersey Volunteer Infantry, June 2017
Illustrations
Figure 1: US Flag - 9th New Jersey Volunteers (State of New Jersey/Department of Military and Veteran Affairs)
Figure 2: United States Army. Corps Of Engineers, and Millard Fillmore. Eastern portion of the military department of North Carolina. [S.l, 1862] Map. Retrieved from the Library of Congress, https://www.loc.gov/item/99447455/.
Figure 3: The Civil War in America: The Picket Leading the Ships of the Burnside Expedition over the Hatteras Bar.—From a Sketch by Our Special Artist.—See Supplement, page 200. Vol. 40, No. 1132, P. 187.  February 22, 1862
Retrieved from the Emory University Library, http://iln.digitalscholarship.emory.edu/illustration/v40p187.jpg/.
Figure 4: Sneden, Robert Knox. Plan of the Battle of Roanoke Island. North Carolina. Feby 8th 1862. [to 1865, 1862] Map. Retrieved from the Library of Congress, https://www.loc.gov/item/gvhs01.vhs00070/. (Accessed October 17, 2017.)
Figure 5: Sneden, Robert Knox. [Plan of the Battle of Newberne ! North Carolina: fought March 14th 1862]. [to 1865, 1862] Map. Retrieved from the Library of Congress, https://www.loc.gov/item/gvhs01.vhs00079/. (Accessed October 17, 2017.)
Figure 6: "The Burnside Expedition - Storming of Fort Thompson at New Bern, North Carolina, March 14, 1862"  Harpers Weekly, 1862.
All images part of a spread in Harper's Weekly, 1862 titled:  "The Burnside Expedition- The Storming of Fort Thompson at New Bern, North Carolina, March 14, 1862." Courtesy of Son of South, available from http://www.sonofthesouth.net/leefoundation/civil-war/1862/april/newbern-battle.htm (accessed May 16, 2012). As found in: http://www.ncpedia.org/new-bern-battle
​Figure 7: The Missouri History Museum. "The Civil War in Missouri", http://www.civilwarmo.org/gallery/item/CWMO-158?nojs=1
​